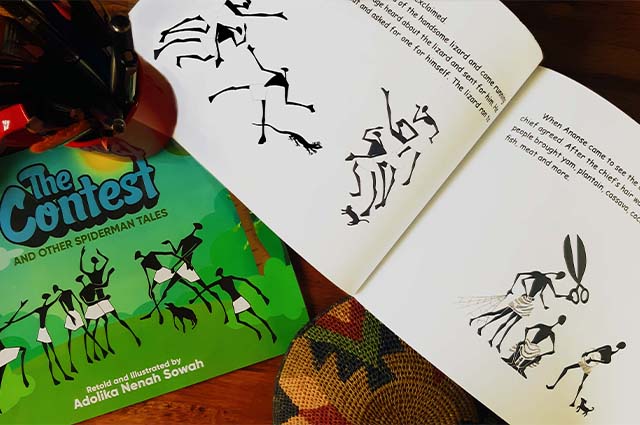 I have always loved Ananse, the spider man (also spelled Anansi), the cunning folk character of legendary laziness and greed. These stories originate from the Akan people of Ghana and each year, I am lucky to discover more of these tales. These keep the Akan folk hero alive, interesting and relevant in popular culture. Some of the stories I have heard or read, are from within Ghana and others from the Caribbean and the Americas where Ananse stories migrated during the Trans-Atlantic Slave Trade.

In many books, various artists and illustrators from Ghana, the Caribbean and other parts of the world have re-imagined and depicted Ananse in diverse and unique ways.

In Ghana, Ananse is traditionally depicted as either a man or a spider. He is often represented as a spider – the word Ananse comes from the Akan for a spider species commonly found in homes, and on whom the character is based. Ananse is also represented as a man – the strengths and flaws of human nature are clearly recognizable in this folk hero.

When Ananse is represented as a man, he is traditionally depicted having a huge potbelly. In that potbelly, we see both his greed and his laziness, all rolled into one.

A new kind of Ananse

Over the years, I have felt uncomfortable with this depiction probably because I, personally, have been fascinated with another facet of his character – his daring, extraordinary wit and cleverness. In many stories Ananse displays this ability to both good and bad ends. His mind is a whirlwind of new ideas, new schemes and bold yet calculated risks. He is always on the go, solving tasks and being chased by adversaries.

In The Contest, I have retold and illustrated seven popular tales.  In these stories, Ananse is cunning, sometimes diabolical and his motivation is greed, a voracious appetite and an unwillingness to work.

For example, in The Gum Man, Ananse plays dead, rather than work with his wife on their farm. In another, he attempts to steal all wisdom to himself and keep everyone else around him stupid. At the end of these tales, Ananse is punished and we are presented with a moral. But there is another side to Ananse. In other stories we admire the spider man’s ability outwit his adversaries or solve complex tasks using his brain rather than brawn.

The two things I did

What I did in The Contest is to re-imagine the depiction of Ananse. For one, he doesn’t have a potbelly. This is an Ananse who is lean and agile and both man and spider. In my illustrations, I attempted to capture the spider man’s daring and quick wit by focusing on the depiction of his movements. I chose to highlight and capture the daring, the ludicrous and the hilarious qualities of his escapades. The Contest presents a dynamic Ananse, who moves at every turn and seems to leap out of the pages of the book.

In my work, I was inspired by great artists from different parts of the world and time periods in history – the unnamed artists of South African Rock art and the English illustrator Arthur Rackham.

The two are very different works. One consists of silhouette cuts and was created by an English artist, as illustrations to a book in 1919, and the other, rock art in the Matobo Hills of Southern Africa was created by the San people for religious purposes at least 13,000 years ago.

The two couldn’t be more different at first glance, but I was able to find striking similarities, draw from both, and synthesize the two into what are the final illustrations in The Contest. This was a fascinating journey I describe it in more detail in another post.

The Contest is out and I am lucky to be among a long list of other writers and artists, who have applied their vision and artistry to the depiction of this much loved fireside hero, for all of us to enjoy. It is because of this history, that Ananse remains a favorite folk hero of mine.